Hello lovelies! Welcome to my post on the Holidays with Jane: Trick or Sweet collection as part of our Fall into Austen event. I am so excited to have been able to announce our latest collection (see the post right before this one). Holidays with Jane: Thankful Hearts will be hitting ereaders and shelves next month and I’m thrilled for you guys to get to read my take on Northanger Abbey – Catherine is definitely one of my favorite Austen heroines! 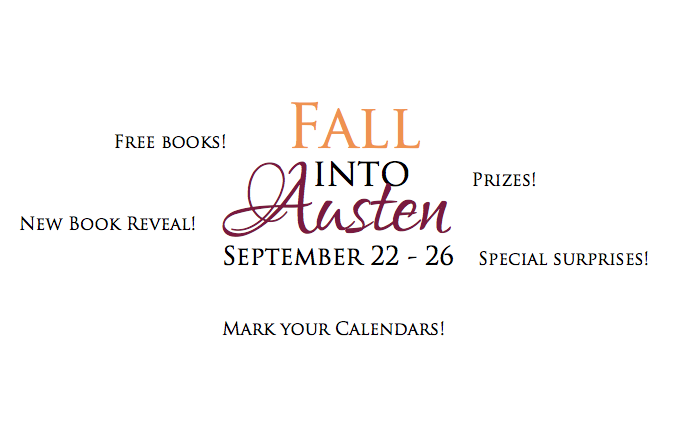 Fall is upon us (at least here in the Rocky Mountains – where leaves are already changing and I can see snow on Pike’s Peak), and before we get to Thanksgiving we get to celebrate one of my favoritest of all holidays: Halloween!

For our Halloween collection I ended up with Pride and Prejudice. Now, you wouldn’t think this would be a hard story to adapt because everyone has and even I’ve done it before…but everyone has and I have done it before! How could I possible write something new and/or interesting when it’s been done a million times? I absolutely love P&P adaptations that focus on Darcy’s point of view (see Nancy Kelley’s His Good Opinion if you’re in the market for one), and I also love the idea of setting P&P in high school. I always hope that there will be men that learn Darcy’s lesson early. And that lead me to Will Harper – and boy, did I fall in love with him as I wrote him!

My other is issue is magic. I love it. I write it into almost every story. So far two of my Holidays with Jane stories have had magical elements and two haven’t – and those two that haven’t almost killed me. Writing straight, modern romance isn’t necessarily my strong suit as it turns out. But Halloween is the perfect time to write magic, and the perfect time to turn Georgiana Darcy into a fairy godmother of sorts (teenage fairy godmothers are another secret obsession story idea of mine).

So in Beyond Midnight I got to combine all of my favorite things – Halloween, Austen, YA, magic, fairy godmothers, and a young Mr. Darcy. I hope you enjoy it as much as I loved writing it. In fact, you can get it FREE for Kindle during our Fall into Austen event.  Let me know how you liked Will and Elena as a modern Darcy and Lizzy if you do!

If you scroll down, I’ve included the first scene from Beyond Midnight. If you were heading out to the Trick or Sweet dance, who (or what) would you go as?

And make sure to enter our Fall into Austen giveaway! Winners get picked tomorrow night, so there’s still time!
a Rafflecopter giveaway

Will Harper stared at his sister in horror. He actually couldn’t see his sister, she was completely obscured by the large, shiny plastic garment bag she was swinging in front of his face. But the horror—the horror was real. “What IS that?”
“It’s your costume!” Her grinning face popped out from behind the bag.

Will gritted his teeth. “That much I got, Ana.” There was a white tag attached to the hanger on a string. He flipped it over. “Regency Dandy,” he read out loud.

“Yup.” Her head jerked up and down.

“Do I even want to know what a dandy is?” He was pretty sure he didn’t. He could see lace through the clear plastic of the garment bag. Lace. He was going to be laughed out of the locker room on Monday morning. He might as well not show up for football practice. He probably should just skip school altogether. Maybe drop out completely.

Ana lowered the garment bag as her grin turned fiendish. Will was sure it was the kind of grin demons used to welcome poor, lost souls into hell. “A dandy, Will, is a stylish gentleman—much like yourself—but from the 1800s.”

He cocked an eyebrow. “I’ve never been accused of being a stylish gentleman.”

Ana’s grin transformed into a smirk. “True. Scratch the ‘like yourself’ part.”

He shook his head. “I’m not wearing it.”

“You haven’t even seen it.”

Will glared at the lace. “I’ve seen enough of it to know I’m not wearing it.”

“A bet is a bet, William Harper.” She blinked her wide, blue innocent eyes at him. Too innocent.

He narrowed his eyes at her in suspicion. “Don’t you think GOING to the Trick or Sweet dance is enough punishment? No one I know goes to that.”

“That’s because you only know Neanderthals and cheerleaders. And that’s the point: expanding your horizons.” She gestured widely.

“I was only going to make you wash my car. Costumes should not be included in World Series bets.”

“All caveats and disclaimers need to be made prior to the placing of the actual bet,” she replied in a sing-song voice. “And I’m sure you were going to make me do something more horrid than just washing your car.”

“No, I never will, because your team bit the big one, brother o’mine. And now you have to go as Mr. Darcy to the Drama Club Trick or Sweet Dance and basically my life is all rainbows and unicorn horns and magical pixie dust.” Ana bounced up and down in barely contained excitement.

“Darcy. Women around the world love him. Here, try it on.” She thrust the garment bag at his chest.

“Is this someone from your Houston books?”

Ana stared at him in confusion. “My what?”

“Those books you’re so into. Jane Houston.” He raised an eyebrow as Ana let out a peal of laughter. “Jane Dallas?”
“Oh my god. I’m, like, actually ashamed to be related to you right now.”

“Get over yourself and your Jane Some-Town-in-Texas snobbery, Ana. Actually don’t. Take this moment to realize that I’m too uncivilized to even be seen in public with.”

Ana regarded him suspiciously. “You’re messing with me to get out of going to the Trick or Sweet Dance, aren’t you. You know Jane Austen.”

“Not personally, no.” Will grabbed the hanger and pulled the plastic up. The buff colored breeches seemed to mock him. “These pants look ridiculous.”

“They look almost exactly like the football pants you wear to every game. But yes, you’re right. Ridiculous.”
He scowled at her beaming face. “I don’t like how much you’re smiling.”

“What are you going as?”

“You’ll see.” She rubbed her hands together in glee. “My costume is perfect. Perfect in a way that you—a guy who wears the same pair of jeans for three days in a row—couldn’t fully comprehend.”

Ana sighed in happiness and clasped her hands over her heart. “Tulle. There’s tulle with tiny, sparkly rhinestones on it. And it’s eggshell blue. I’ll probably get punch all over it by 9:30. I’m so not getting my deposit back.”

“How much was this deposit?” he asked. “Like, how upset is Dad going to be when I completely accidentally,” he winked broadly, “spill something on you so that we can leave the dance early?”

Ana crossed her arms and glared at him from under too long bangs. “Do. Not. Think. About. It. Will. Harper.”

“How long do we have to stay?” He asked as he inspected the costume. “What is this thing, like a lace tie?”

“A cravat. And to the last dance.”

Will poked at the lace. What felt like a dull jolt of electricity ran up his index finger. “What the hell?” He jerked his hand back and shook it. “Is this thing rigged with one those hand buzzer things?”

Her brow knitted. “What are you talking about?”

“Your stupid costume shocked me.”

“Really?” Ana looked from the costume to her brother’s hand which he was still shaking. Her eyes were too wide and innocent again. “Interesting.”

“What are you planning? Murdering me with a Halloween costume?”

“Static electricity is an actual thing, you know. You don’t have to accuse me of practical joking your costume.” She grinned. “Just you wearing this thing is going to be the best thing that happens to me this year.”

“Yeah?” Will poked at the lace again, tentatively. This time there was no shock. He still planned to examine it thoroughly before he put it on ‘cause he trusted Ana nowhere near as far as he could throw her.

“Charlie,” she announced with pride.

“Going to the Trick or Sweet Dance with us.”

Will looked up from the costume in shock. “How’d you manage that?”

“I have my ways.” She twirled a strand of dark hair around her finger. “Evil, evil ways.”

“Truer words,” he said with disgust as he pulled the plastic back down over the costume.

“Whatever. I just pointed out that Jen Benson is going to be there. And that she’s planning to wear a hella sexy costume. Steampunk Tinker Bell.”

Will stared at his sister. “Who’s this girl? And how is a teapot sexy?”

Ana rolled her eyes. “Steampunk has nothing…well, very little usually…to do with teapots. How can you not know who Jen Benson is? Charlie has had a crush on her since the start of the year.”

“He’s your best friend.” Ana planted her hands on her hips and shook her head sadly.

Will shrugged again. The plastic bag around the costume making a crinkling noise as he did.

“Dudes are weird. Clueless and weird.”

“You’re just accepting that?” she asked.

“No point in arguing with you. I’m exhausted already.” Will slung the bag over his shoulder and headed for the stairs.

“We are leaving this house at exactly seven p.m., Will Harper. Not a minute later.”

Will grunted in assent.

“This is going to be epic!” she called after him. “Tonight will change your life!”

Will rolled his eyes at her dramatics. Horrible as it sounded, playing Mr. Darcy for a night at least promised to not be life changing.