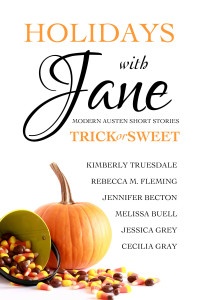 Load up on pumpkin spice, grab your bowl of candy, and settle in for a spooky night with six brand-new modern Jane Austen adaptations from the authors of Holidays with Jane: Christmas Cheer and Spring Fever!

*****
Must Be Magic
by Kimberly Truesdale
Eight years ago Anne Elliot made a devastating choice. When a new threat and an old love both come into her life, she faces that choice again. This time will it be love or will it be magic?

Once Upon a Story
by Rebecca M. Fleming
Catie Morland isn’t sure how to explain what happened at Abbey College’s annual Fall-o-Ween event until bumping into vacationing sisters Jane and Cassie. Will everything begin to make sense as she tells them the whole story?

Insensible
by Cecilia Gray
Miriam Dashwood has to throw a party for straight-laced Brandon Firestone without spending a dime. When the lead for rock sensation Willow Bee offers a free performance, Miriam figures he’s her hero. Brandon has other ideas, but will free spirited Miriam come around to his way of thinking?

Emma Ever After
by Melissa Buell
Emma Woodhouse is determined that this year’s Fall Ball will be the most successful one yet. An influx of single men in Highbury make a Bachelor Auction a reality. Can she work her matchmaking magic once again?

Mansfield Unmasked
by Jennifer Becton
An impromptu Halloween party at Mansfield Park Boarding House provides Pug an opportunity to use his magic powers to unite Pryce and Spenser. But can he expose their true feelings for each other before his powers fade?

Beyond Midnight
by Jessica Grey
Halloween isn’t what Will Harper planned. His sister is playing fairy godmother. He’s at Chawton High’s Trick or Sweet Dance. He’s in costume…and falling for Elena Marquez? Is it real or magic…and can it last Beyond Midnight?