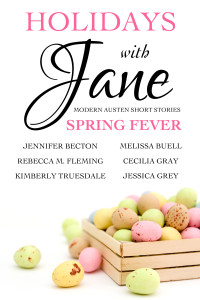 Winter’s almost over and Jane Austen’s got a case of spring fever! The authors who brought you Holidays With Jane: Christmas Cheer return to bring you six modern adaptations of Austen’s classics. So put up your parasols and prepare for sunshine, smiles, and, of course, happily ever afters.

Annie Elliot still regrets breaking off her engagement to minor league baseball player Rick Wentworth ten years ago. Now he’s back in town coaching the team she works for and stirring up feelings she’d rather forget. Will Rick and Annie get a chance to hit a walk-off home run or will they strike out in Extra Innings?

Miracle at the Abbey
by Cecilia Gray

Kathia, paranormal investigator extraordinaire, is out to prove her hometown Abbey is a bona fide miracle site—even if its sexy owner-slash-handyman Henry is dead set against it. Kathia and Henry square off and settle the score that’s been brewing since high school in this contemporary Easter retelling that ends with a Miracle at the Abbey.

Whine and Wineries
By Melissa Buell

After their father dies, the Dashwood girls must make room for their half-brother John and his wife Franny in their Hollywood Hills home. When Franny’s brother Edward shows up unexpectedly, Elinor finds a new friend.But any dreams of something more are crushed when the girls have to move far away to Barton Winery. There Elinor begins her new life as a wedding coordinator. Her first challenge? Bridezilla Anne Steele’s spring wedding. When Anne’s sister Lucy reveals a secret that changes everything, Elinor must sort through the lies to find the truth of her feelings and hope for her future.

Emma Woodhouse keeps her finger on the pulse of Hartfield, Georgia through a series of texts and emails full of hometown gossip and romantic intrigue. In Hartfield, nothing ever changes: people fall in love (sometimeswith a little help from her), get married, and life goes on in the same comfortable way. But when hometown favorite Frank Churchill returns unexpectedly, the whole town develops a case of spring fever. Though a master at maneuvering the love lives of those around her, Emma finds she needs some advice of her own—and her family and friends are happy to fill her inbox with all the help she needs.

No Vacancy at Mansfield Motel
by Kimberly Truesdale

Fanny Price runs Mansfield Motel, the family business in sunny South Florida, mostly on her own. But she dreams of following in her Uncle Thomas’s footsteps and becoming a marine biologist. She plans to talk to her cousin Eddie about her dreams when he comes home for Spring Break. But when he brings along Henry and Mary Crawford, trouble starts to brew. Fanny watches her precious future begin to slip away. With everything on the line, will Fanny finally speak up for herself? Or will she be stuck running Mansfield Motel for the rest of her life?

When reformed party girl Lydia Bennet receives an invitation to her ex George Wickham’s destination wedding, she accepts with the intention of showing him exactly what he gave up when he dumped her. But no amount determination can change Wickham’s view of Lydia, especially not when circumstances conspire to make her look even more like a party girl than ever. And then there’s her sudden attraction to old college friend Kyle “Denny” Dennison…. Now that Lydia has reimagined her whole life, will she be able to forget the past and open her heart to the future?